My Coffee Memoirs to date

You are here:
About 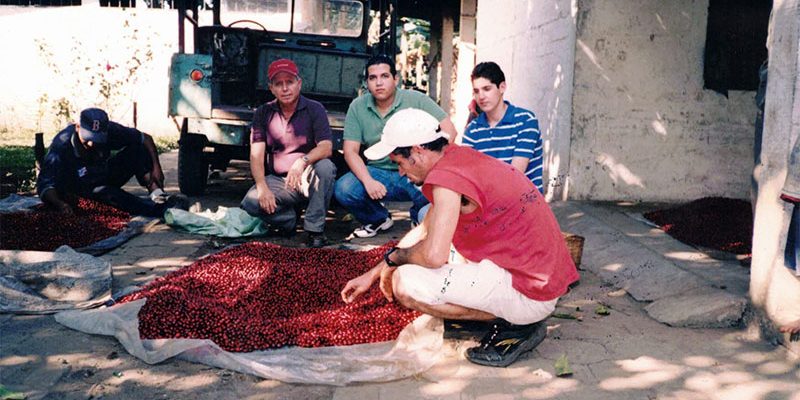 I grew up in Charlotte, NC making me a rare Charlottean as it seems no one is from here now a days, but as far as I can remember I always spent my vacations in El Salvador. Meaning I would get to spend time with family and visiting the family coffee farms!

Farm days would start early in the morning as the coffee fields are about one away from San Salvador. It would usually be a guys trip with my Grand Father Tomas Trigueros, my Dad Tomas Trigueros II (Founder of Jags Head Coffee) and my brothers Tomas III and Diego. We would usually be arriving at the gates of San Jorge Estate by 8:00am which would be the beginning of 2-mile drive on what one would call a sketchy dirt road! 20 minutes later we would be at the base of the farm. That would be the first stop where we would be greeted by the farm manager. He would talk to my grandfather and dad to give them an update on what has been done in the past few days and is being worked on at the moment. After the 15minute update we would begin a hike through the fields. As a kid walking in the middle of fields felt like if it was a jungle as coffee trees can be over eight feet tall. I always stayed close to my dad to make sure I would not get lost in there. The sounds and smells of a coffee field can be unique depending on the time of the year I would visit. If it was when the coffee tree would be flowering it would be a Jasmine smell. If the coffee was ripening it would be a sweet smell of all the sugars the coffee cherries pack. When we would be walking through a field with ripe coffee, we would always look for a huge cherry and squeeze the two seeds to check how sweet the coffee cherries are. As a young kid I asked why the coffee is sweet? That is when my father explained to me that coffee is a fruit and the seeds gets roasted and eventually brewed. As we would walk up and down the hills, we would constantly stop to check the progress of the upcoming crop. We would make sure harvest was coming in evenly. Making sure all parts of the farm were being taken cared of properly to ensure we would have a healthy farm.

While walking around the farm we would always here the buzzing of bees. It was common to find hives around the farm. It was something that would make me a bit nervous as it seems like there were millions of bees around. Last thing I wanted would be getting stung by one which eventually I did get a sting! I would always complain about the bees until I learned that the bees were our friends at the farm. My father explained to me why we liked having the bees around us, the answer was simple and might sound obvious. We had the around for the pollination process at the farm.

Having the farm up high on the side of the volcano was hard to rely on resources. At various points of the farm we had giant tanks made out of wood. In those tanks we would collect rain water.

After a couple of hours of hiking it would finally be time to have those packed sandwiches at the cabin. After lunch we would play around the gardens and climb trees. We would also walk into the small the pineapple and orange garden.

After we would play and the adults got their rest it would be time to call it a day and return back to the city. It would not be rare for us to return with interesting lava rock that we would find on our hike. We would always find cool shaped rocks from previous volcanic activity which helped us produce amazing coffees! What is interesting to say is as a kid I never expected to be roasting these coffees today. I look back and I tell myself this feels like the right thing to do to keep the family legacy in coffee for future generations to come. I hope you enjoyed my memories of the past and my coffee in the present!

From Our Farm to Your Cup!